It has been deemed a very popular location for 2019, but not only. The “Città dei Sassi” is always a top destination. What is there to see in Matera besides the neighborhoods con-taining the famous Sassi? A great deal: the Cathedral of Matera; the MUSMA Matera; his-torical houses; "cave houses”; rupestrian churches; museums; and libraries - in a combina-tion between history and the contemporary.

What to see in Matera for the weekend

Matera is not only about the splendid Sassi! If you are wondering what to see in Matera during a weekend getaway that will let you explore every aspect of this very particular ci-ty, just follow our suggestions and plan an urban trek and in the Murgia Materana to di-scover many small yet wonderful beauties.

The Sassi, as is well known, constitute the historical center of the city of Matera and are the main focus point that are responsible for attracting thousands of tourists from all over the world every year to this small stone capital of the Mediterranean. The neighbourhoods of Caveoso and Barisano form a small little sort of village on their own and were included on the list of "World Heritage Sites" by UNESCO in 1993.

Let's start with a visit to the center that will to take you to new places which are worth vis-iting in order to see the sights that exist in Matera besides the Sassi.

During a Panoramic trek, we suggest that you don’t miss visiting some of the most evoca-tive houses  that were excavated and converted into museums, small theaters and so much more ...
Casa Cava Matera

In Sasso Barisano, for example, Casa Cava Matera, or the Center for Creativity definitely deserves a visit.

Casa Cava Matera is located next to the Rupestrian Church of San Pietro Barisano. The central body consists of a pit with a particular extraction system of stone ashlars for con-struction. This is very rare in Matera, where the main technique was normally open-pit ex-cavation.

There is no information on the date that the quarry was put to use: according to some scholars it could date back to 1663 which was the same year that Matera was elected the capital of Basilicata. Today you can reach it by crossing through some caves connected to the large room from which one could gain access only from the top, originally.

Today Casa Cava Matera is a multi-purpose cultural center, entirely excavated in the rock. It is 900 square meters and is made up of 10 different environments including an auditori-um that can accommodate up to 140 people. Its versatility makes it a place that is suitable for concerts, theatrical performances, exhibition spaces and meeting place. It is definitely a must-see and witness the perfect harmony between beauty and functionality.

Visiting the Cathedral of Matera

The Duomo in Matera, or the cathedral dedicated to the Madonna della Bruna and Sant'Eu-stachio is the main place of worship of the city. There are other countless places of wor-ship such as: churches, rock churches and small chapels.

The Cathedral of Matera was built in the Apulian Romanesque style in the 13th century. It was constructed on the highest spur of the Civita which divides the two Sassi, near the an-cient Benedictine monastery of Sant’Eustachio who is the Protector of the city.

To ensure that the new temple dominated the surrounding buildings and the two valleys of the Sassi, it was necessary to raise the rocky base by more than six meters.

The main altar was restored in 1627 and lays below the large altarpiece executed by Fab-rizio Santafede  which depicts the Virgin Mary surrounded by the Saints. In the apse, you can admire a valuable wooden space for the choir made of solid walnut which was carved in 1453 by Giovanni Tantino of Ariano Irpino and divided into 60 stalls. At the top right, you will see the electric organ with electric built by the Fratelli Ruffatti which contains 35 registers on two manuals and pedal. 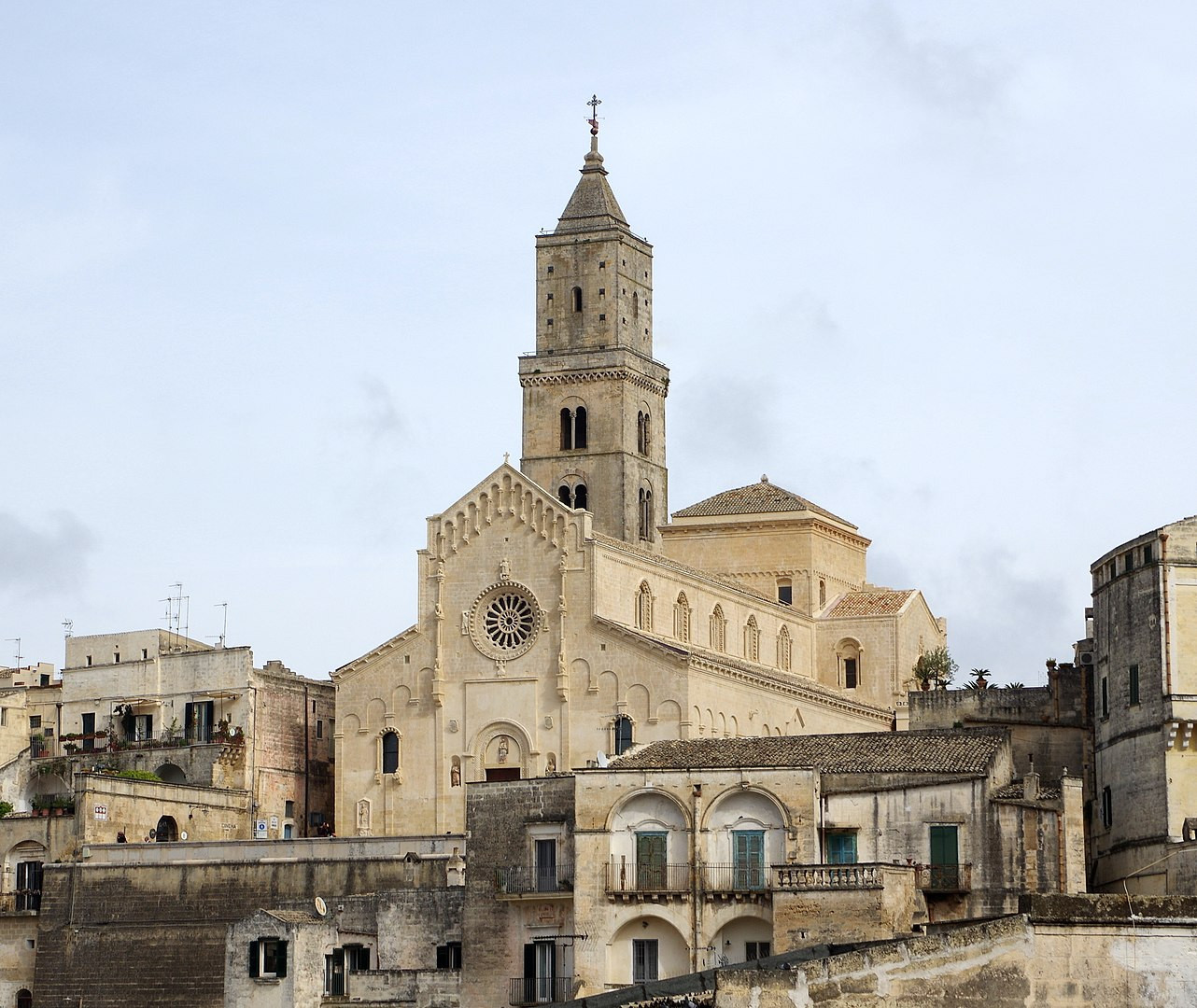 What s there to see in Matera and in its underground? Do not miss the descent to the so-called Palombaro Lungo, or the largest underground water cistern of the city which is lo-cated under the pavement of Piazza Vittorio Veneto.  The rain and spring waters of the hills of La Nera, Lapillo and Macamarda converge at this location.

The Palombaro Lungo, along with other underground cisterns, forms the famous under-ground part of Matera. The cistern is part of a water collection system that extends along the entire length of the Matera stones and was necessary to supply its inhabitants.

Visiting the cistern is an experience which we greatly recommend: it has tuff walls that have a rounded shape and which are covered with a waterproof plaster - cocciopesto. They are about 18 meters deep and 50 meters wide and have a capacity of about 5 million liters of water.  The Palombaro allowed the people of Matera to access the water supply by low-ering small buckets through two external holes.

From the MUSMA Matera to the Matera Library

The face of the more contemporary Matera brings you to visit the MUSMA Matera which is considered the most important Italian museum entirely dedicated to contemporary sculpture.

It was inserted in the evocative setting of Palazzo Pomarici (XVI century), and is the only museum that is located inside of "a cave" in the entire world. It is the perfect place where complete symbiosis is experienced amongst the sculptures and some of the most charac-teristic places which are carved in the Sassi of Matera.

The museum spaces do not only consist of the areas that are constructed above-ground,  but also to the large excavated underground areas where a collection of works of art is reinforced by the strength of the rocky environments. Here, the visitor can experience a truly “full-immersion" experience consisting of an intense emotional impact felt when walking among these secular environments which were carved by man and the contempo-rary sculpture housed there.

Another very important place located in Matera which is full of culture is the Matera Li-brary, named the Provincial Library "Tommaso Stigliani”.

The current location, much is much  more spacious than the previous ones contains a large number of rare and valuable books that come from various donations and bequests on be-half of many families from Matera that made their cultural heritage available to all of the citizens.

Around the 1980s, the library was enriched with a vast collection of vintage gramophones donated by Roberto Merolla who was a professor ar the Egidio Romualdo Duni Conserva-tory. A roller organ belonging to the de Curtis family was also added.

Where to eat: Dimora Ulmo Matera

Where one should eat in Matera is truly a superfluous question: wherever it is possible to taste the great dishes of the Lucanian and Matera tradition, or rather,  dishes that are based on the ancient agro-pastoral tradition which are often revisited in a contemporary key.

However, there is a restaurant that stands out  above all the rest for its refinement and a marvelous panoramic view of the Sassi: Dimora Ulmo Matera. This restaurant is listed on the Michelin Guide and has a truly authentic soul.  Tis is also reflected through the con-cept that defines this local Matera coem as a "renewed return to tradition”.

Dimora Ulmo Matera defines elegance placed on a plate: it is here that Michele Castelli and Virginia Caravita,combined their vision with that of Nico Andrisani and Francesco Russo after the experience they gained in the Bottura kitchens. They created a corner of pure gastronomic excellence in the heart of the most beautiful, noble dwelling: the Sassi.