The Pollino embracesgthe extreme northern part of Calabria and the south of Lucania.  It offers uni-que panoramas consisting of natural paradises, and precious villages set among rocks and with a bold feel. Let's explore the thousands of treasures in the Pollino starting from its marvelous stops that offer breathtaking landscapes to the five greenhouses that are all  2000 meters above sea level.

From Serra Dolcedorme to Monte Pollino -  from Serra del Prete to Serra delle Ciavole and Serra di Crispo, it is possible to admire a natural spectacle made up of deep gorges similar to the Grand Ca-nyon and wide river valleys.

Serra Dolcedorme is named so for its sinuous shape that resembles a relaxed woman. It  is the hi-ghest peak in Calabria and reaches 2267 meters above sea level. It is called the "Queen of the South" because this imposing mountain slopes steeply on its southern side over the plains of Sibari and forms an imposing wall which is the largest in southern Italy.

Mount Pollino, despite being second in height to Dolcedorme, owes its name to the entire massif, which has an ambiguous origin. There are two theories regarding this subject: some attribute the na-me to the Latin "Pullus”, which means young animal. Others believe that the name is linked to the divinity of Apollo and comed from the Latin "Mons Apollineus". This was thegod of medicine, pre-cisely because of the very different species of officinal herbs that spontaneously grow.

The enchanting nature found in the Pollino

Due to its two hundred thousand hectares, the Pollino National Park is the largest in Italy and em-braces 3 provinces: Cosenza, Potenza and Matera, and as many as 56 municipalities. The millenary natural heritage preserves the rich geodiversity. Among the nuerous wonders, you will come across  the Pino Loricato which is the Park's emblem and an Italian endemic species. This is the reason why it was included on the list of the  10 Italian Unesco Heritage Geoparks.

The peaks of the Massif are made up of imposing rocks that are covered in snow for most of the year and offer truly incredible views.  The peaks of Dolcedorme, Cozzo del Pellegrino, as well as the Pollino and Orsomarso provide horizons which face two seas: the Tyrrhenian and the Ionian.  Maratea and Paria a Mare are located on one side, while Sibari and Metaponto are on the other.

When you reach a high altitude, you can admire unique panoramas on the gorges in a natural setting consisting of oak trees, maple trees  and chestnut trees that give way to beech trees and to a dense undergrowth that is rich with beries which are excellent for jams and liqueurs: this is a tangible sign of man's millenary link to the earth.

The warm season offers wonders for your sense of smell and a gorgeousview thanks to the extensive orchid, violet and bellflower beds founf in the Pollino, but also to the officinal plants present such as: lavender, mallow, dill and wormwood -  to name a few.

The Pollino is an open-air gym

The Pollino is a true spectacle of nature that also offers incredible experiences dedicated to outdoor sports: a real open-air gym.

The sports practiced at the Pollino Park change with every season, and offer unique adventures and emotions. The choices include: rafting, canyoning, and free climbing if we want to mention the most extreme or simply exploring the many trails available by mountain bike, on foot or on horseback.

The Pollino is the destination of outdoor tourism par excellence. Among the original sports to practce there is also water-trekking which allows you to discover small canyons and streams that can be climbed upstream as well if you have boots and suitable clothing.

In the summer you can indulge in water sports thanks to the numerous rivers and streams in the area.  In the winter you can devote yourself to cross-country skiing, hiking and snowshoeing: it is truly a natural paradise that will excite you in every season. 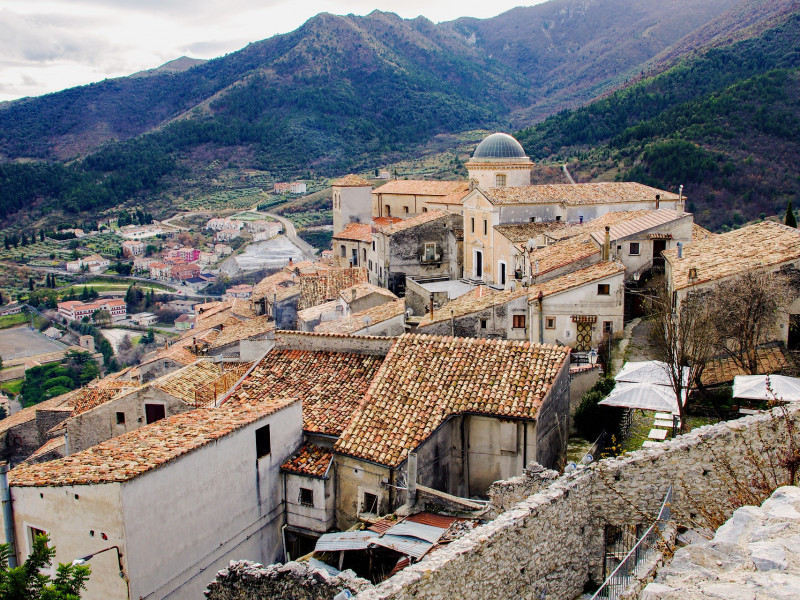 The must-see places of the Pollino

The must-sees start from Castrovillari to the many small villages such as Laino Castello and Civita.  The Pollino is full of historical, cultural and architectural beauties and hosts numerous important tra-ditional folk and international events at the same time.

The Calabrian side of the Massif overlooks the Plain of Castrovillari: at the foot of Mount Pollino you will find Castrovillari which is a small city set in the  natural valley called "Conca del Re" which is the largest center in the Park.

The city is known for hosting events such as the Primavera dei Teatri and the Estate Internazionale del Folklore. It has a very characteristic historical center where the Aragonese Castle stands out among the many historical architectural treasures.

There are many must-see villages in the Pollino among which is Civita .  a Greek-Albanian village that preserves its strong religious, linguistic and ethnic identity and that houses a part of the most famous gorges of the Park -  the Raganello ones.

Laino Castello and its historical center are also worth a visit. It is a small feudal village that stands on a rocky hill surrounded by the Lao river. It is known as "Il Presepe del Pollino". Also worth men-tioning is Morano Calabro. It is included in the network of the most beautiful villages in Italy.

Flavors of the Pollino

The flavors and traditional dishes of these places  deserve a special itinerary of their own: even in the kitchen, Calabria and Lucania seem to embrace and the outcome is a series of truly unique ga-stronomic specialties.

First of all, we must mention the famous crusco pepper which is a sweet red pepper that is laid out to dry and placed in boiling oil for a few seconds. The list of  culinary excellences is long and inclu-des the Pollino Truffle, honey, the lentils of Mormanno, and the bread from Cerchiara bread.

There are also many typical dishes which belong to the agro-pastoral tradition, such as the "Pasta ammuddicata", which is spaghetti seasoned with anchovies and breadcrumbs. This dish is still usual-ly prepared for Christmas Eve dinner, as well as the "patani e cancareddi", or potatoes and peppers.

The Pollino is a vast territory that offers nature, fun, history, traditions and flavors and that is defi-nitely worth exploring! It is the ideal place to take  a slow-paced vacation, but that also leaves room for an adrenaline rush.
Riproduzione riservata © Copyright Altrama Italia.

Castrovillari is a town and comune in the province of Cosenza in the Calabria region of southern Italy. In 2010 its population was 22,586. History The name derives...