The heel of the boot is a region full of beauty that comes in a thousand different flavors, that is found in the stone that bears witness to centuries of history, that is experienced on the paradisiacal beaches and  explored through the untouched nature. From the expanses of dry land inhabited by ancient olive trees to surprising glimpses of the sea, Puglia is a magnificent place that should be slowly savored.

With its 860 kilometers of coastline, excellent food and wine heritage, incomparable architectural treasures, and rich tradition of folklore and dances that are intertwined with ancient rituals, Puglia is one of the most loved lands also for those who come from abroad.

Visiting the heel of Italy by car is certainly one of the experiences to do at least once in your life time because it allows you to explore the innumerable nuances of slow tourism and do so in complete relaxation in order to to fully enjoy every place, even those that are most unknown.

Travelling from Bari to Lecce by car

Our journey starts from Bari -  the region’s capital. If you come from far away or if you arrive by plane, you could rent a car. You can do so  by using the internet to find the best price or simply rely on Hertz to not go wrong.

If you travel along SS16 you will head towards Lecce stopping at Polignano a Mare and then continuing on to Monopoli. While you make your way towards the baroque city it is worth your while while to make a small detour and visit Ostuni -  the white city -  and then continue om towards Brindisi until you finally reach Lecce.

It is convenient to make a stop here for at least the day in order to explore the city far and wide. Old Bari is a wonderful labyrinth of alleyways, panaromas, historic and local buildings.

The sea breeze invades the alleyways and accompanies the scent of freshly baked focaccia: when you visit the old part of the city, one of the most surprising things is when you come across tables full of fresh pasta put to dry in front of the doorways of the elderly women of the place. You can  take a peek and watch the preparation of the famous Apulian orecchiette.

Do not miss the Svevo Castle, the Basilica of San Nicola and the fascinating heritage hidden in the subsoil such as: the ancient hypogeums excavated in the tuff and the rock churches. You cannot miss taking a walk along the Bari seaside with its solemn buildings, which is the largest in Italy, as well as the Murattiano district. It is considered the new urban center of the city where the historic Petruzzelli theater and the sixteenth-century Palazzo del Sedile are located. 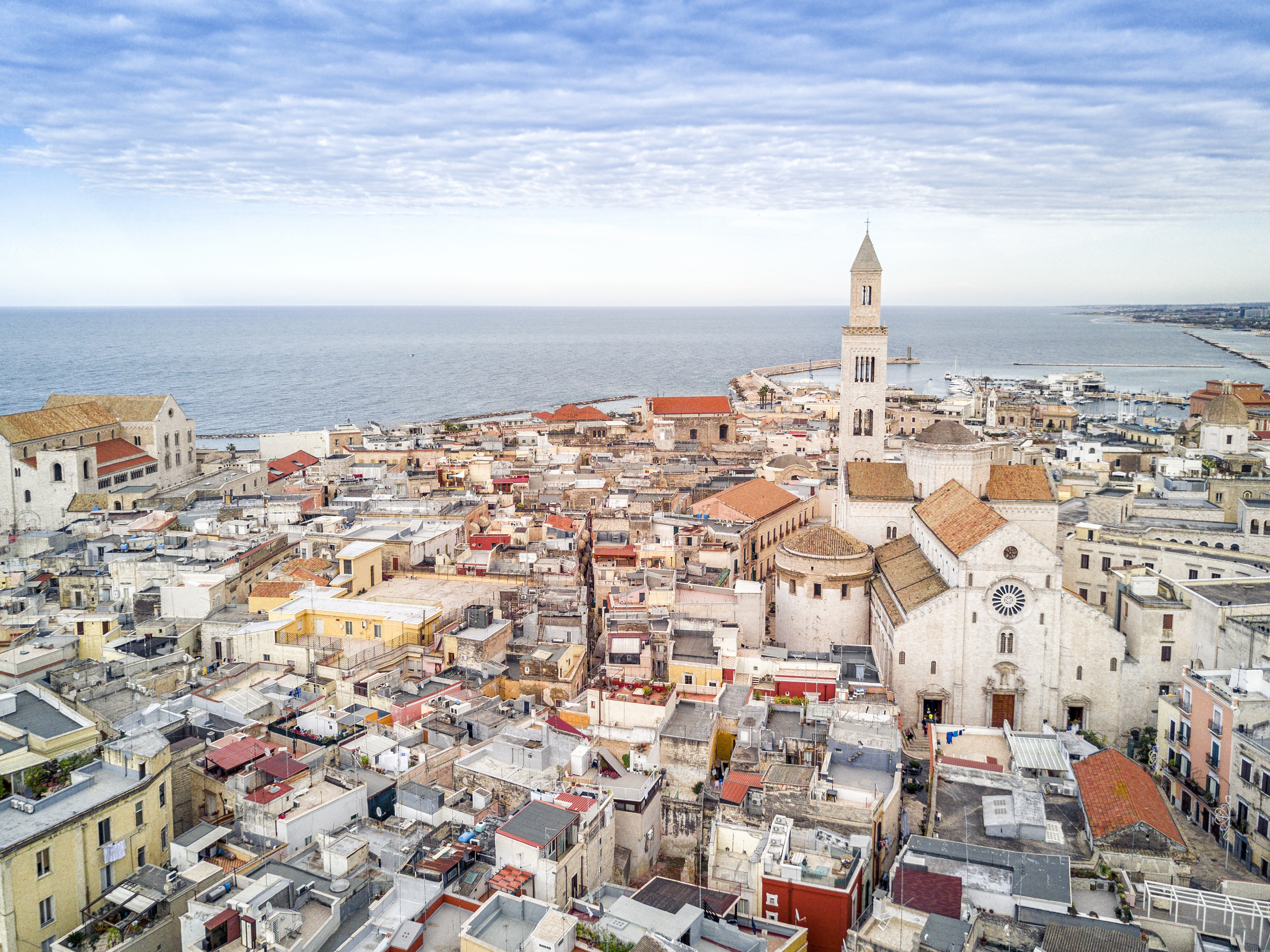 A mini Puglia exists. It’s called Polignano a Mare. It is a small fishing village that was once an important port for Eastern merchant ships during Roman times. Polignano a Mare is a real live postcard: from the white houses that seem to form a small nativity scene on the cliffs where the waves of the sea seem to sing ancestral songs, to the maze of narrow streets of the historical center.  It is definitely one of those places that you must visit at least once in your lifetime.

Polignano a Mare is the city of Domenico Modugno. On the boardwalk that is named after him you will come across a panoramic rock terrace where you can admire one of the most beautiful corners of Italy. It is situated just behind a statue of the singer-songwriter and accessible by a small staircase.

If you stand and admire the view from the panoramic terrace, your gaze will be captured by the Lama Monachile cove with the majestic five-light bridge built on the old Roman bridge during the Bourbon age. Lama Monachile is the most famous cove in Polignano and is located on tVia Traiana, which is an ancient road that connected Rome to Brindisi.

Another ancient fishing village that will leave you absolutely breathless is Monopoli. It is an ancient Messapian city and considered one of the ideal destinations in 2019 for the New York Times. From the Greek monè polis, or rather - unique city, it is one of the most popular destinations for those visiting Puglia.

Food and wine, rural culture, archaeological sites and historical monuments coupled with a varied coast that alternates between large coves and equipped beaches, Monopoli is the tourist center of Murgia.

Among the must see beaches there are: Proto Bianco, Porto Paradiso and Cala Verde. On the other hand, the medieval Castle of Charles V which today houses the Municipal Archaeological Museum and the baroque dwellings, are worth a visit.

Our tour of Puglia by car that starts off from Bari and makes its way to Lecce but will make a small detour to visit another treasure of Puglia. We have left the province of Bari and entered Salento to explore the White City.

While we are on the road, in the distance we can already see a wonderful cluster of white houses  that stands out on three hills. You are now in the province of Brindisi. As you get closer to the medieval village of Ostuni, the feeling is equal to finding yourself in an Arab qasbah with all of its houses plastered with white lime.

As you enter the White City, you will discover a maze of alleyways with artisan shops, restaurants and small shops. Meanwhile, in the center stands the majestic fifteenth-century Romanesque-Gothic cathedral

Since ancient times, and even up till today, Porta d’Oriente is an important port city. Brindisi is located between two wonderful inlets. The characteristic Alfonsino Castle, also known as the Red Castle for its color, stands on the narrow channel that flows into the open sea.

You can dine in the area where the port is located in the evening or simply enjoy an aperitif at sunset thanks to the particular colors of dusk and the lights that are reflected in the water. At nightfall it is particularly impressive.  In addition, you will come across fresh and tasty fish here  to try while you enjoying the atmosphere and the other the local specialties.

Also worth seeing is the Castello Svevo which overlooks the Ponente canal of the port, instead. Do not miss the church of San Giovanni al Sepolcro. The Roman Column.

Dulcis in fundo you will arrive in the heart of Salento -  to Lecce -  a city rich in history where past centuries seem to overlap in all of their beauty. From the ancient Roman amphitheater to the splendid baroque buildings, Lecce is a real gem made in stone.

Our tour to explore Puglia by car end in this city which is full of cultural turmoil, night clubs, small shops and trattorias all concentrated in the walls of the old city. From Piazza Sant’Oronzo which is the heart of the ancient city, you will continuously come across monuments and historical buildings of rare beauty.

There isn’t enough time to talk about it all. Among the must-see’s in Lecce: the Duomo, the Paisiello Theater, the Basilica of Santa Croce and the Castle of Carlo V. You can also indulge in the typical Salento cuisine while enjoying a beautiful Ciciri and tria or spaghetti with sea urchins.