San Nicola Arcella overlooks the Tyrrhenian Sea and is situated between Praia a Mare and Scalea. It has a very long and wide coastline which is characterized by gray and fine sand which is caressed by the clear waters that range from intense turquoise to clear blue.

The name,"San Nicola", seems to derive from the Latin, and more precisely, from the term "arx": high ground. In fact, it is on a hill where the inhabited nucleus of this characteristic village located in the province of Cosenza rises: it is a small corner of paradise loved by tourists.

At its foot we find a bay that is enclosed by a rocky arm that seems like a natural harbor and which today is a popular and renowned seaside resort whose beaches retain the charm and beauty from another era.

San Nicola is part of the famous Riviera dei Cedri and is originally a fraction of the neighboring Municipality of Scalea. In 1912, however, it gained full autonomy under the name of San Nicola dei Bulgari,  also because of the Basilian monks who came there from the East to escape the iconoclastic persecutions and who found refuge there.
Today, San Nicola Arcella is a small village of about 2 thousand inhabitants. In the summer this number increases considerably due to the many tourists who come to visit  its marvelous beaches and its characteristic woods.

But let's proceed step by step and see -  in detail  - what to visit and what to do when choosing San Nicola Arcella as a destination for your holidays.

The Arco Magno - one of the most beautiful beaches in Italy

Let's start from the famous Arco Magno which is a fascinating cave located in a natural cove. It is a unique place and is reachable on foot through paths carved into the rock - or by boat. It is formerly known as the "Grotta del Saraceno", and is the gateway to a wonderful beach with extraordinary colors. It almost seems like an enchanting painting made by Mother Nature.

On the little beach of Arco Magno there is also another peculiar cave from which fresh water flows. It is a ravine, to tell you the truth, that is almost completely overshadowed by the splendor of the Arch.  On its northern side you can also count on the fascinating and timeless presence of the Aeneas cave  which connects the suggestive lagoon of the Arch with "Enea beach” that is  located in the immediate vicinity.

Arco Magno is a cozy, intimate, and almost uncontaminated place that is perfect for spending hours of pure relaxation in order to regenerate both the body and mind. It is said that this tiny eden once bewitched a visitor with its beauty, and who before his eyes saw all of its immense purity. He admired it from his boat and was extremely fascinated by itd imposing splendor. Thus, he decided to nickname it "Arco Magno",  to emphasize its majesty.

The historic center of San Nicola

In relatively recent times, the historic center of San Nicola has been the subject of a careful restoration which contributed to making the most beautiful part of San Nicola even more attractive to the eyes of the tourist: from the squares to the ancient mansions, to the church placed on a balcony in the central part of the town.

Recently, a few frescos have been created on the external walls of some houses: the paintings recount the historical episodes of the territory, but also tell us about the ancient craftsmen and about everything that participated in shaping the character of these splendid places. We can start from the representation of the first navigators who arrived on the spot to colonize the place that became known as the Magna Grecia.

The Church of San Nicola da Tolentino is a place of worship characterized by different architectural styles and was built by local craftsmen. It was born as a simple chapel, and subsequently - thanks to the expansions made that were desired by the faithful -  became a real church. Inside it houses the statues of Saints that were again offered by the devotees, as well as a wooden statue depicting Saint Nicholas of Tolentino.
You can also admire several frescoes representing scenes from the Holy Scriptures in all of their splendor.

The Palace of the Princes of Lanza from Trabia

The baroque-style building, which can also be seen from the belvedere, dates back to the 18th century and is located in the Dino area. It was the summer residence of the Spinelli family from Scalea. It was built on two floors: on the upper floor there were the rooms where the princes spent the summer and on the lower floor the food supply was located.

The Crawford tower (or Saracen tower)

It was an ancient watchtower that was commissioned by King Charles V, and was meant to safeguard San Nicola Arcella and its coast from the continuous invasions of pirates and Saracens.

Today it is one of the masterpieces from a time gone by and dominates the Gulf of Policastro (the cove where San Nicola stands).

Between the end of the 1800s and the beginning of the 1900s, the Tower often became the summer residence of the American writer Francis Marion Crawford who stayed there for over 10 years: it was a living space that gave impetus to the creative genius of the author who exploited its charm and drew inspiration from it for some of his novels and short stories (some of which are set in San Nicola). 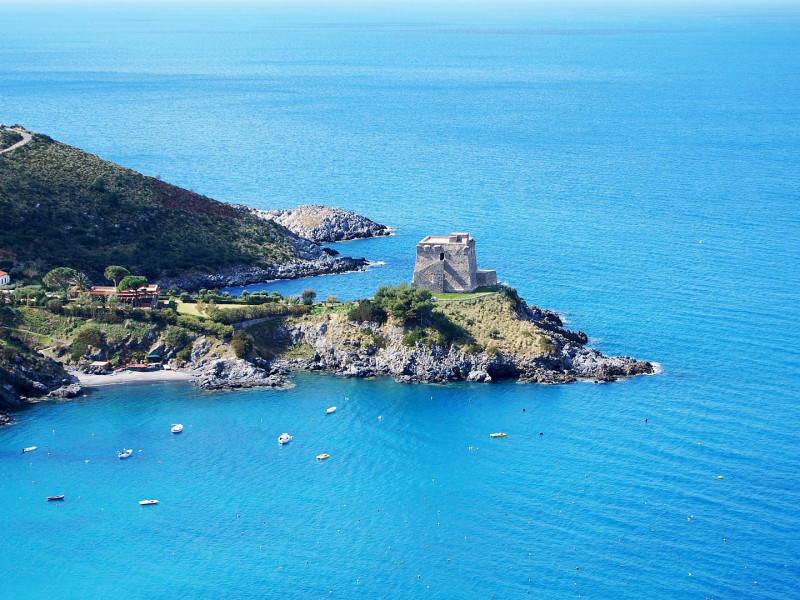 The tower of Dino

Built in the 13th century, the Dino tower bears the same name as the area in which it is located. Among its many functions, it is also considered a  "lighthouse”. In fact, it illuminated the sea in the Angevin period by means of a light installed on its highest part so that the boats knew where to find shelter.

It is a sun-kissed territory for the entire summer and offers the possibility of taking long swims in its crystal clear sea to its visitors; at the same time enjoying, at the you can enjoy its natural, cultural and historical beauty.

San Nicola Arcella is a town and comune in the province of Cosenza in the Calabria region of southern Italy.