Let's start by taking a trip to Positano, a beautiful town and the frame of the Amalfi coast. It is situated among breathtaking landscapes and crystal clear waters. It is characterized by an enviable climate thanks to the mountains that surround it and which lead to the sea

Let's start our journey from the historical center. This is where the visitor's gaze is immediately captivated by magnificent views of the sea and by the small artisan shops who populate the alleyways ofthe city.

The lower part of the center is occupied by fully equippe0d beaches and the tourist port which is always full of visitors.

Positano includes three picturesque hamlets in its municipality: Montepertuso, Nocelle and Laurito. The first is known as the "monte perforato" and is located in the northern part of Positano. It is the same for Nocelle which is also located in the northern part. The historic village of Nocelle is the highest part of the Municipality, and is reachable only by walking along the trails of Montepertuso or via a long staircase starting from the district of Arienzo. Laurito, on the other hand, is located at the southern end and is crossed by the Freeway 163.

This hamlet is characterized by a small beach that is reachable by sea or by going down a staircase.

On Montepertuso a curious and interesting legend circulates: it tells us a story of how the Madonna used her index finger to pierce the mountain following a clash with the Devil. It was the latter who challenged her to demonstrate her strength: the Demon tried to pierce the site with his hands but without success. The Virgin Mary, on the other hand, succeeded with ease and sent Satan off the cliff.

In honor of the Madonna every year on July 2nd a feast is celebrated with a firework display which makes Positano livelier than ever.

Along the coast it is possible to admire the watch towers used during the period of the Angevin and Aragonese domination. These towers were used to fight raids by Saracen pirates.

In the tales told regarding the ancient origins of Positano, its history is intertwined with legend. It tells us how the city was founded by Poseidon who was the Greek god of the seas. From a strictly historical point of view, we have the first data of this city during the medieval period.

Monks that came from the East founded an abbey. In the surrounding area, a community of peasants soon developed which began to colonize the adjacent territories. When the Saracens destroyed Paestum, an ancient city of Magna Graecia. The survivors sought refuge from the religious peoople. The area of Montepertuso and Nocelle was therefore made livable.

The remains of the Benedictine abbey have been brought to light thanks to a series of excavations, and today it is possible to admire what remains of the crypt and the ancient cemetery of the monks.

In addition to the columns that date back to the first century A.D. and the mighty walls erected to support the structure of the church, the crypt still preserves the typical colanders used for mummifying the bodies. Through a staircase which is currently unusable, it was possible to directly access the church dedicated to San Vito who is the patron saint of the city. The church houses the reliquary of the saint and a painting of the black Madonna.

In our journey, we cannot miss the opportunity to take a glance on its insides. 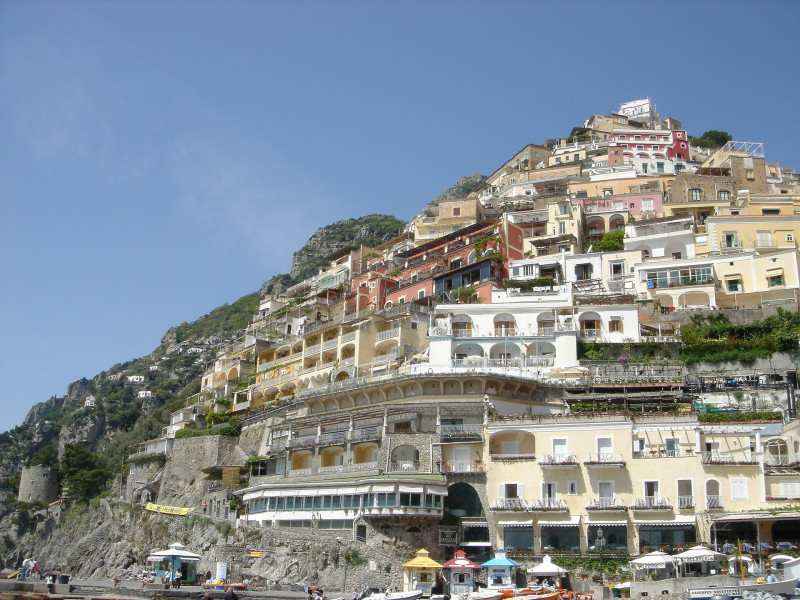 Positano is a city with a strong tourist vocation. Since the period of the Roman Empire it was known as a holiday destination. But the city experienced a period of great tourism and wealth especially during the years following World War II. Many soldiers passed through the coastal town during the conflictual period. Once the war was over, they wanted to
return as tourists and admire the charm of the small town located in the province of Salerno.

Due to this great demand from tourists, Positano was forced to adapt to the requests: numerous restaurants and hotels were born in order to satisfy the most demanding requests of the visitors.

One of the tourists was a certain John Steinbeck

The famous American writer wrote splendid words for Positano: he fell in love with it. In one article he described the city as a place that does not seem true until one is there to live it , but one feels extreme nostalgia once you leave.

In short it was a great advertisement for Positano which increased with importance as a worldwide tourist destination.

In addition to natural beauty as well as historical and cultural heritage, in this city you can taste the best local gastronomic delicacies. It is not limited only to seafood, but also to the delicacies that come from the nearby Lattari mountains.

During our trip to Positano we can’t fail to notice, but above all can’t wait to visit, the famous archipelago of the Li Galli islands.

The archipelago consists of three small islets: Gallo Lungo, La Rotonda and Dei Briganti. Gallo Lungo is the largest island of the three: the only one to be inhabited.

It is a place steeped in history, but above all it is known for being a great protagonist of mythology.

Tourist guides will tell you about how these islands are also known as the place where the Sirens lived and bewitched the sailors who passed through. Defenseless to their songs, they lost control of their ships and crashed against the rocks, finding death.

The mythology tells us how only two ships avoided this tragic fate. The writer Homer, in Odyssey, recounts how the legendary Ulysses tied himself to a tree of his own ship so that he could hear the wonderful song of those creatures without losing his life, and threw himself into the sea.

The other members of his ship used wax to cover their ears.

The Argonauts were saved thanks to the brilliant Orpheus. He began to play his lyre so strong that he was able to overcome the dangerous song.

How to reach Positano

If you are coming from the city of Sorrento, Positano is the first town you will come across along the coast. It is just about 60 kilometers away from Naples which is roughly a 45 minutes drive, and only 20 minutes away from Sorrento and Amalfi.

In addition to travelling by car and the connection with the local buses of SITA, it is possible to reach Positano by the marine connections during the summer (from April to October). Ferries and ships depart from Salerno, Sorrento, Amalfi, Maiori and Minori.

Many advise not to rent a car in Positano. You will hardly ever need it. Every place of the small town is reachable on foot: you will move faster among the narrow alleys on foot. All you must do is face the fact that there are many series of steps, hills and descents.

This trip to Positano made us discover some of the faces of this town which not only offers a splendid sea, but also history, mythology, and mountain trails which are all intertwined amongst culture, great food and entertainment.

Positano is a village and comune on the Amalfi Coast (Costiera Amalfitana), in Campania, Italy, mainly in an enclave in the hills leading down to the coast. History...