Let's discover the village of Santa Fiora, one of the most beautiful villages in Italy. It is perched on the southern slope of Mount Amiata which is located in the province of Grosseto. Here we find the "land of water”

It is definitely ne of the Tuscan towns that are a must-see: a picturesque village where the element of water is king and which creates an atmosphere full of charm in every season. Santa Fiora is also ranked among the most beautiful villages in Italy and was assigned the status of orange flag of the TIC - Touring Club Italia - for a three-year long period of 2018/2020.

«The historic center of Santa Fiora is extensive, typical, cozy, full of tourist facilities and full of typical shops. For information regarding historical, cultural, naturalistic, gastronomic and events, tourists can refer to the information point located in the historical center. All of the tourist sites and the characteristic structures where one can eat and stay overnight are easily reachable thanks to the effective sign system ». Lorenzo, ghost visitor TCI

The city is built around the Fiora river: the antiquity of the village, the culture, and its traditions are still alive and make it a truly unique place. It is surely worth a visit at least once in your lifetime. It is also the ideal destination for a holiday in Tuscany for those who just want to relax and be pampered by the sound of water, as well as for those who want to embark on a journey to discover art and ancient customs.

What to see in Santa Fiora

1. Terziere di Castello
The center of the "land of water" is historically divided into three neighborhoods. The oldest part of the village is terziere Castello where we find the remains of the Aldobrandeschi buildings and fortifications. In the large square, on the other hand, we can find the Torre Trecentesca and the Palazzo Sforza Cesarini which dates back to the sixteenth century.

The Renaissance building is the headquarters of the Municipality of Santa Fiora and home to the Museum of the mines of Monte Amiata.  Between the 1800s and the 1900s the area was in fact characterized by the extraction of mercury. At the end of the square is where Via Carolina begins. It is the only street that crosses all three of the towns: Castello, Borgo and Montecatini.

Do not miss the Piave of Saints Flora and Lucilla which is the most important monument of Santa Fiora.  It houses a valuable collection of ceramics which are attributed to Andrea della Robbia.

2. Terziere di Borgo
The Porticciola introduces us to the village of Borgo which is a natural development of the ancient town. For years it was the most populated part of the town and its outskirts. Between the Convent of the Poor Clares and the Augustinians it was was once seated in the Jewish Ghetto.

In this neighborhood - which is surrounded by walls - you can enjoy splendid views that overlook the mountains and the Peschiera. A must-see is definitely the Church of Sant’Agostino which was founded in 1309.  From its adjoining convent the only original piece that remains is an arched doorway dating back to 1473. 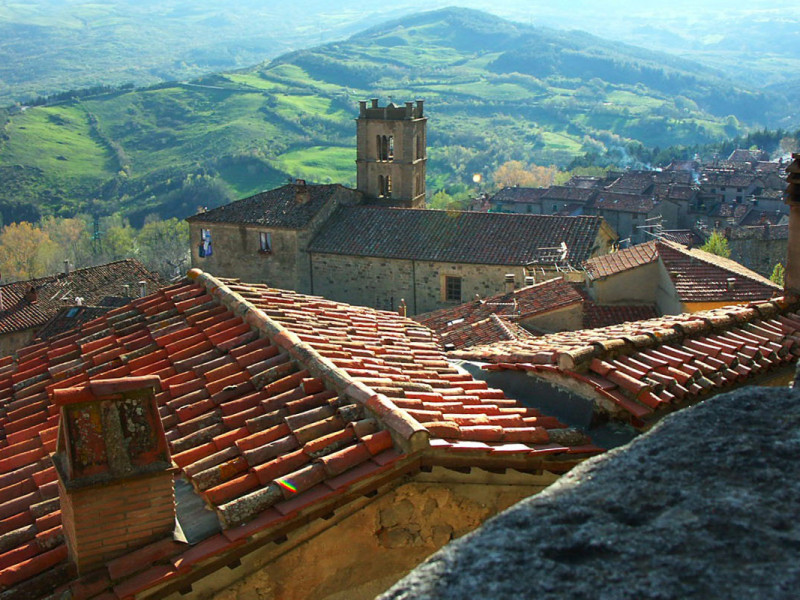 3. Terziere of Montecatino
If we pass under the Porta di San Michele,  we will arrive to the most suggestive part of Santa Fiora: the Montecereino district. Here the mirror of water of the Peschiera dominates: it is a basin that gathers the waters of the Fiora and seems to get its name from catino which means”basin” -  intended as a water collection point.

The Peschiera of Santa Fiora was probably a trout farm of the Aldobrandeschi family, subsequently transformed by the Sforza Cesarini into an elegant Renaissance garden-park containing cypresses, lindens and magnolias. 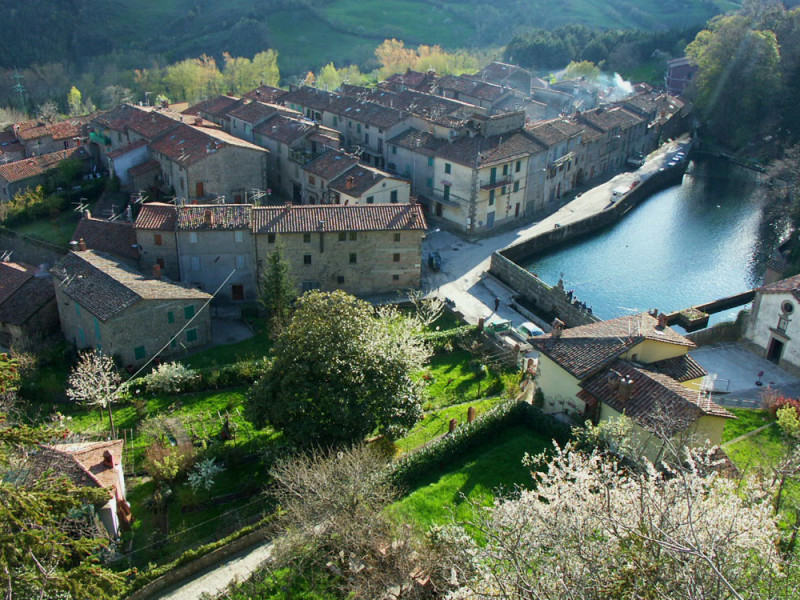 4. The Peschiera and the Fiora spring
Adjacent to the body of water we can find a small and suggestive church called the Madonna della Neve which is also known as "Pescina". The small church was built by the Augustinians in the seventeenth century and is quite humble but rich in frescoes which are attributed to Francesco Nasini. What makes it unique is its glass floor from which you can admire the water spring of Fiora.

This is definitely a journey in search of tranquility in one of the must-see Tuscan villages where you can indulge yourself with the flavors of the Amiata,  such as the Sanfiorese chestnuts. You can also attend one of the ancient traditional festivals, particularly the Carnival of the dead which is example of theatrical and popular celebration regarding death and the will of Carnival.

Santa Fiora is a comune (municipality) in the Province of Grosseto, in the Italian region of Tuscany, located about 110 kilometres (68 miles) southeast of Florence...