One of the "top" destinations for this year's Christmas holidays can only be in Matera with the many conclusive events that make it be considered the Capital of Culture. Booking and spending Christmas 2019 in Matera means treating yourself to the unique thrill of experiencing the famous Nativity in the Sassi. This is a must-attend event that will make you experience a true Christmas atmosphere in one of the most beautiful places in Italy.

Once again the historic center of Matera and its Sassi - a  UNESCO World Heritage and Capital of Culture 2019 -  literally transforms itself into Bethlehem and turns on every single light in the stone village to welcome visitors and tourists who choose to spend Christmas 2019 in Matera.

Let’s talk numbers regarding the Nativity in the Sassi? Over 600 participants are ready to stage the Nativity in what is rightly considered the largest and most evocative living Nativity Scene in the world. The journey is about 700 meters long and is immersed in an atmosphere that faithfully recalls that of ancient Galilee. It has spaces dedicated to typical crafts, historical re-enactments, tastings and sacred celebrations. It provides a calendar full of appointments.

It is no coincidence that the Live Nativity of Matera has even entered the Guinness Book of Records! The breathtaking route of Christmas 2019 in Matera winds its way between Sasso Barisano and Sasso Caveoso while passing through the mysterious Caves of the Parco delle Chiese Rupestri which has always served as an outdoor film set.

As of today, only the dates provided by the official website of the cultural association that manages the event are known. For more details (schedules and costs) it will be necessary to wait a little longer. Meanwhile let's add these appointments to our personal Calendars and book Christmas 2019 Christmas in Matera as soon as possible:

Absolutely not to be missed: the closing ceremony of the year that celebrates Matera as European Capital of Culture 2019 will take place on December 19 and will last the entire week. 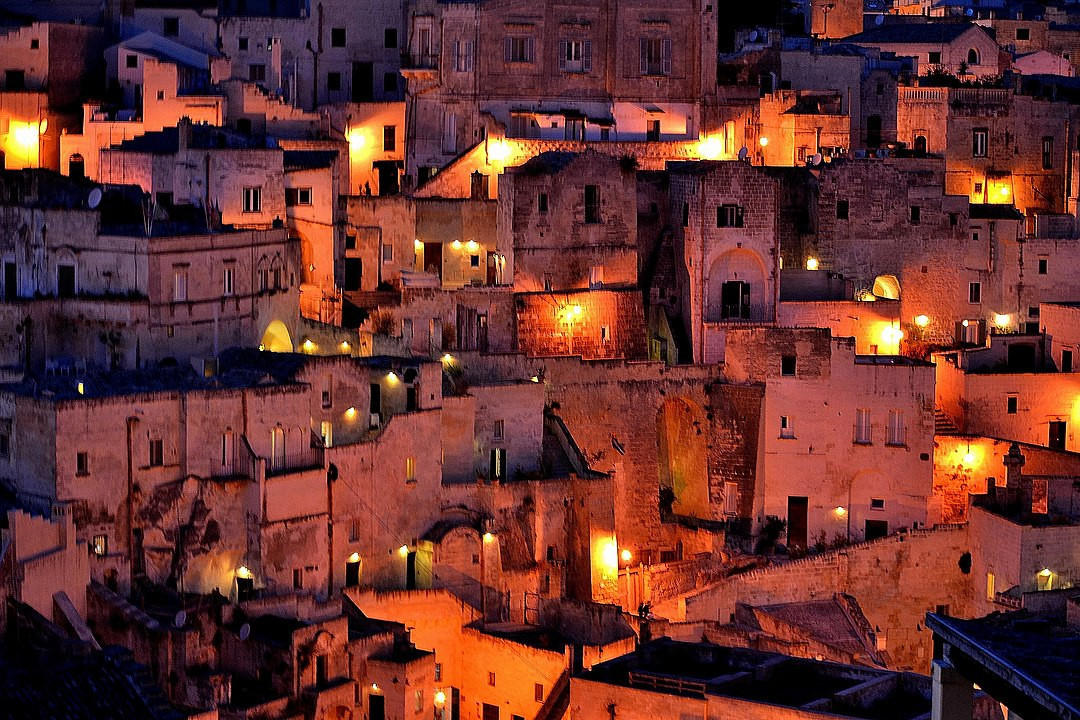 Other useful information to better organize the visit

Keep in mind that to attend the re-enactment, you must pay a fee. The event takes place from sunset to late evening, so it is advisable to concentrate a visit to the other parts of the city during daylight hours and to start in the Sassi quarters when the first flames are lit. Opt for warm and comfortable clothing (especially shoes) and if you have very small children it is better to avoid using a  stroller in favor of a more practical baby carrier.

There are many special guests during Christmas 2019 in Matera:  the famous Jesolo Sand Nativity 2019, the great Sand Nativity constructed every year by the artists from the Venetian city.

The bas-relief has Baby Jesus’ Nativity as its theme and will be one of the precious pieces of the exhibition which is now in its third edition. It is known as the "National Nativity Scene of Italy" and is set up in the exhibition spaces of the former San Rocco Hospital which is located in the center of the historical city of Matera.

But the Nativity in the Sassi is not the only attraction of Christmas 2019 in Matera.

What to see during Christmas 2019 in Matera

Never before did we suggest that you book early like we suggest this year in the City of the Sassi. The rest will come by itself -  the attractions are not lacking.

Matera transforms itself with lights and magic with the arrival of the Christmas season and the Cathedral shines like never before. The most exciting time to visit it at Christmas? During midnight mass!

From the highest point of the city - Civitas hill -  the Matera Cathedral offers a splendid view of the Sasso Barisano. The building dates back to the 13th century and stands on the remains of the ancient Benedictine Monastery of Sant Eustachio. The facade which was built in the Apulian Romanesque style, welcomes us with a beautiful richly decorated portal surmounted by the statue of the Madonna della Bruna and an important rose window with 16 rays (symbol of the Wheel of Life).

Inside, in addition to the famous stone cradle made in 1534 by Altobello Persio, the Basilica preserves several treasures such as: a Byzantine fresco by the "Maestro della Bruna", the Last Judgment, fragments of a cycle of frescoes of which Hell and part of Purgatory (XIII and XIV century) remain, and which were discovered after some restoration interventions, the wooden choir engraved in 1453 by Giovanni Tantino and, on the high altar, the large altarpiece depicting the Virgin with Child and Saints made by Fabrizio Santafede in 1580.

Do not miss Christmas 2019 in Matera among the Chiese Rupestri which is an UNESCO World Heritage archaeological site and dates back mostly to the Early Middle Ages when monasticism made its way into the Christian community through the Benedictine and Byzantine hermits who began to settle in the caves of Gravina, turning them into real centers of prayer.

These sacred places carved into the rock are one of the distinctive features of the entire territory of Matera: crypts, hermitages, basilicas and monasteries are scattered among the Sassi along the walls of the Gravina and on the murgic plateau. We are talking about small treasures which are architectural virtuosities that are rich in pictorial decorations that constitute one of the most significant expressions of the historical-artistic heritage of Matera.

The whole situation is heterogeneous but harmonious at the same time: 150 Rupestrian churches are spread out in the Parco delle Chiese Rupestri del Materano. Among the most famous ones we can find the Church of San Pietro Barisano which is set in the homonymous Sasso and possesses a Romanesque-Baroque facade; the Church of Santa Lucia alle Malve that contains noteworthy frescoes including the "Madonna del Latte"; the Church of Santa Maria de Idris which was excavated in the side of the Monterrone, and the Crypt of San Giovanni which is connected by an internal tunnel and forms a unique rock complex of great beauty.

What to eat during Christmas 2019 in Matera

You can taste the typical dishes of the Apulian-Lucanian Christmas tradition everywhere - from the orecchiette with turnip tops to the Sarconi PGI broccoli rape, from the crushed peppers to the pecorino of Moliterno while tasting some of the typical Christmas sweets.

For a romantic dinner we recommend one of the many restaurants that are set in the carved  rock!