If you're wondering where to sleep in a lighthouse at the same price that you pay at a B & B, our proposal will drive you crazy. Did you know that the Ile Louet Lighthouse - which is a delightful island off the coast of Brittany that is very easy to reach - can be booked at a very affordable cost? Even in Italy  sleeping in a lighthouse is easier than you think - from north to south.

Imagine a rocky island in the middle of a breathtaking bay -  with absolutely  nothing around; imagine the top of a romantic lighthouse that stands out and where you can spend an unforgettable night with your partner. Well, all of this exists and can be booked at the same cost as a trivial B & B.

Where can you sleep in a lighthouse but spend very little while going through an unprecedented experience? In the bay of Morlaix, France where one night will make you experience a Robinson Crusoe type of adventure!

This legendary lighthouse has illuminated the night routes of sailors along the coasts of Brittany for centuries and was transformed into a tourist cottage. It opened in 1857, and remained in operation until the 1960's while  illuminating the cold Atlantic waters in front of the town of Carantec which is located in the extreme north of Brittany, for over a century.

To reach Carantec you must first arrive to Brest and then continue for about eighty kilometers in the direction of Morlaix. From here you must embark for the remote and wild Ile Louet where a white and blue cottage awaits  at the foot of the lighthouse.

After collecting the keys from the Carantec tourist office, you will become the temporary owners of a lighthouse - and an island which will be at your complete disposal -  for a really paltry amount (starting from € 15 per night up to a maximum of € 200 for two nights, for groups of 20 people). 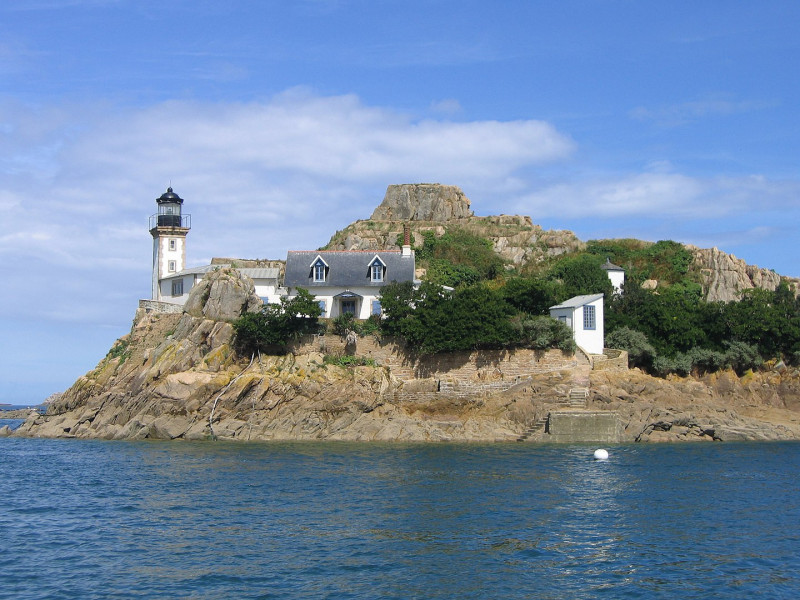 From this moment on a unique experience begins: you will be alone for 24 hours, enveloped only by the sound of the waves breaking on the rocks of the islet. You can abandon yourself to a dimension of unrepeatable relaxation while being literally suspended in time.

Throw your phone away! The island has no internet connection or telephone lines; there are no connections with the mainland, except for the boats that are made available to tourists which are set up by local fishermen only on an as needed basis.

Another thing to give up? There is no hot water in the lighthouse. On the other hand, the shower cabin has a view that opens up directly onto the ocean.

Where to sleep in a lighthouse in Italy

We romantics often wonder. There are so many lighthouses that dot our coasts and many of these - thanks to a redevelopment project promoted by the Agenzia del Demanio -  have now been transformed into real high-class facilities or 5-star hotels where it is possible to live a unique experience.

From Liguria to Sicily - without excluding Central Italy -  the lighthouses compete for the title of exclusive structures for either s  couple's getaway or for a friends' stay, - depending on the space available.

Where to sleep in a lighthouse in Tuscany

Which is the ideal lighthouse for a vacation for two? The one in Punta Fenaio which is located on the wonderful Isola del Giglio in the Tuscan Archipelago.

This wonderful lighthouse overlooks the sea and is immersed in the midst of wild nature. It offers a breathtaking view from its panoramic terraces. This lighthouse is a real treasure located in the northern part of the island.

It was built at the end of the 1800s.  The building is now a magnificent resort with rooms and suites that are equipped with every comfort and was decorated with close attention to the details.

Where to sleep in a lighthouse in Sardinia

The intense scent of pines and junipers welcomes us upon our arrival to the lighthouse of Capo Spartivento which dominates the Marine Protected Area of Cala Cipolla. This is considered one of the most beautiful beaches of Chia located in the southwestern part of Sardinia.

The imposing structure has been transformed into a 5-star hotel which contains 4 suites and two mini-apartments equipped with every comfort.

Once you reach the lighthouse, all that you will  have to do is dedicate yourself to a period of pure relaxation while admiring the splendid panorama from the large terrace with canopy beds, or while sipping an aperitif and admiring the sea at sunset.

The most demanding guests will also find time to  relax at the indoor pool or at the two hot tubs available  for a truly rejuvenating vacation.

Where to sleep in a lighthouse in Sicily

We conclude our "lighthouse trip" among the fragrant vineyards of Malvasia which is the typical Sicilian sweet wine produced on the island of Salina found in a little corner of paradise on the Aeolian archipelago.

It is here that Capofaro awaits us. It is a suggestive place born from the restoration of an old nineteenth-century lighthouse.

The Salina lighthouse has 6 exclusive rooms that were created in the spaces that were once used as lodges for the guardian: also in this case, it is necessary to experience  an immersion into an oasis of peace where you can enjoy relaxing walks among the vineyards and taste the “short kilometer” cuisine  made by chef Ludovico De Vivo.