Celebrating New Year's Eve 2020 in Prague - also dubbed the "Paris of the East” - is an unforgettable experience: it an immense celebration that takes place among the streets of the Old City in one of the most beautiful European cities.

There are tons of things to see and do for the last days of the year in Prague. The most important thing to do is to book the trip early and organize New Year's Eve 2020 well in advance. 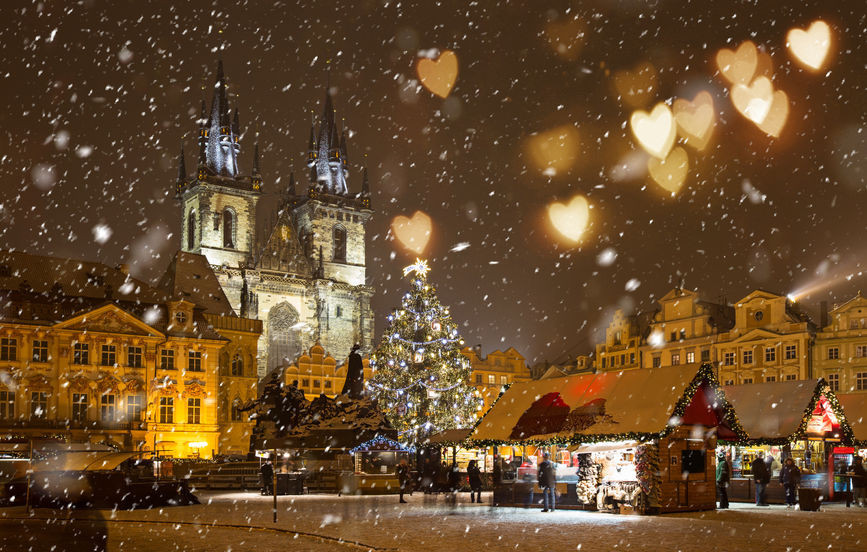 What to do during New Year's Eve 2020 in Prague

During New Year's Eve the Old Town of Prague turns into the center of the world: there will be so many people celebrating until dawn at the Town Hall Tower; when midnight strikes in the main square of Stare Mesto, the extraordinary Astronomical Clock will mark the transition to the New Year 2020 in Prague; and last but not least a great fireworks show will be displayed.

Those who desire an alternative to hustle and bustle can celebrate New Year's Eve 2020 in Prague in a quieter way. One can move between Charles Bridge, the Castle and Petrin Hill where the atmosphere is more relaxed, albeit fun, and the fireworks that will illuminate the colors of Moldova can be admired from a panoramic and romantic spot.

Immediately after midnight those who love to dance will really be confused about where  to go dancing: just to name one - the multi-story Karlovy Lazne is Europe's largest nightclub; if you prefer softer background music - the Reduta Jazz Club is a favorite for fans. It has been in business since the 1950s.

The venue will celebrate New Year’s Eve 2020 in Prague by giving us a various taste of different music ranging from traditional jazz to dixieland, jazzrock, soul, modern jazz, R&B, and rock.

For a more "cultural" New Year's Eve, the Royal Theater is the perfect choice. The delightful cinema-theater has maintained its Art Dèco style since 1929. Although it is true that most of the shows which are organized for the New Year are purely tourist attractions, it is still worth your while to attend one of the many burlesque performances available. 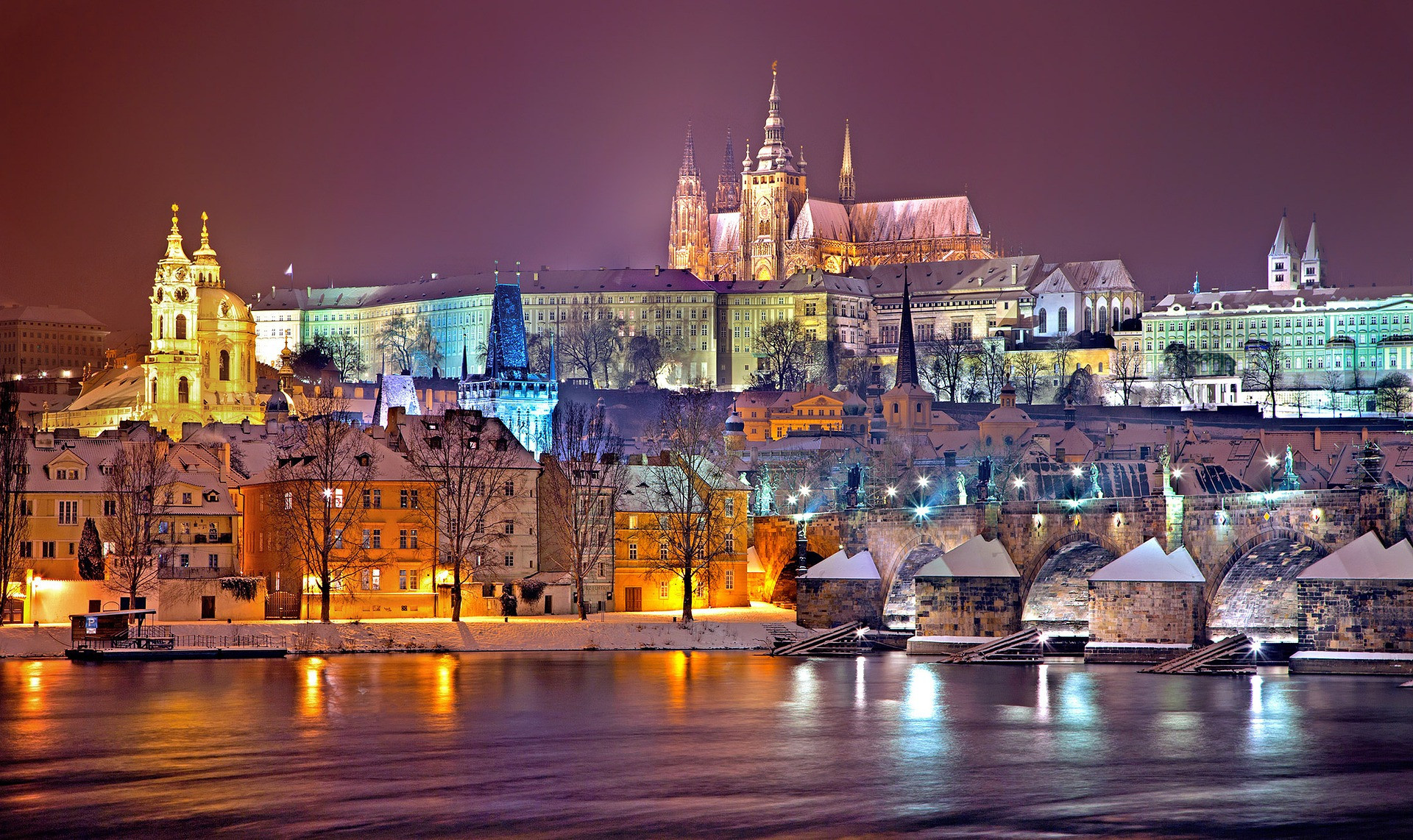 For couples who choose to spend New Year's Eve 2020 in Prague, the celebrations can become more intimate and romantic.

The ideal option is an unforgettable cruise on Moldova which includes dinner on board and musical entertainment at a reasonable price of about 100 Euro per person.

For a classic New Year’s dinner in a nice restaurant located in the historical center, we strongly recommend Hergetova Cihelna Restaurant. Dinner and buffet is available until 3.00 am, accompanied by live music and an amazing view of the fireworks show from the terrace of the restaurant which directly overlooks the banks of the Moldava.

What to see in Prague during New Year’s Eve 2020

It is definitely not an exaggeration to call this wonderful place the "Paris of the East". Prague - the beautiful capital of the Czech Republic - exudes an unparalleled charm and presents several similarities with the French city.

Spending New Year's Eve 2020 in Prague is the best opportunity to discover its ancient streets and go back in time to live an experience of another era. One can do this by simply starting the visti from the aforementioned Clock Tower which is one of the 100 bell towers located around the city. 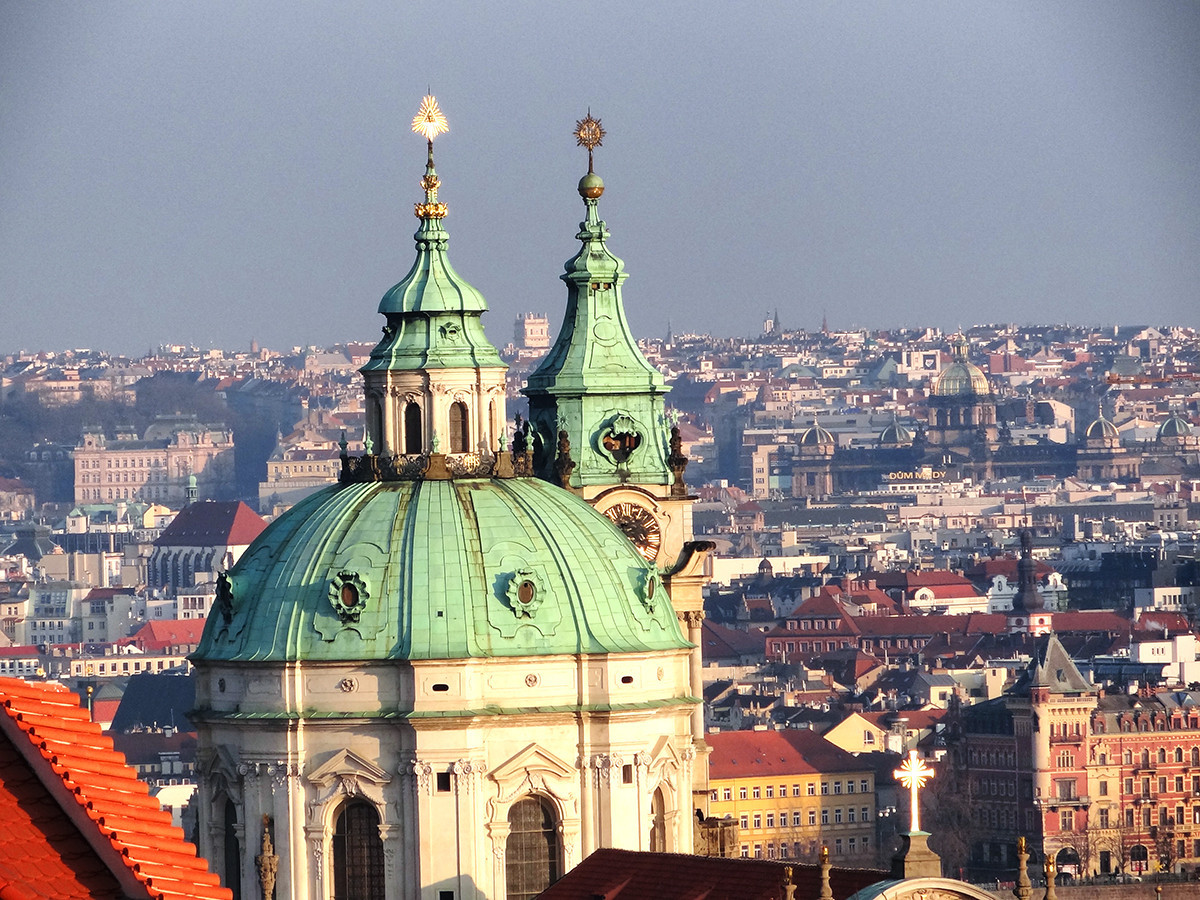 The enchanting Old Town which has been a UNESCO World Heritage Site since 1992, is quite small which makes it perfect to visit on foot. Among the obligatory stops we recommend that you visit the symbol of the city: the Prague Castle which is located in the district of Mala Strana and overlooks the banks of the Moldava. It is considered one of the largest castles in the world and it also houses the Palace for the President of the Republic. The Cathedral of San Vito is another true Gothic jewel: the Bohemian emperors were crowned on its inside. Another must - see is the Basilica of San Giorgio.

It will be a pleasant experience to sip one of the excellent local beers in the heart of the historical center of Prague. Meanwhile, during Christmas time and on New Year's Eve 2020 we recommend taking the time to dedicate a tour of the the Christmas markets which sell local handicrafts for home decoration as well as many other interesting souvenirs.

You must also take the opportunity to taste some of the specialties of the local cuisine. The hard part is choosing one of the many taverns where you spend very little and eat a lot!

Other areas that must be visited are Wenceslas Square, the Jewish neighbourhoods, and a visit to Città Nuova, which contains the unique Edificio Danzante (Dancing Building) - which was built in the 1990s.

Where and how: practical tips for your New Year’e Eve 2020 in Prague

In Prague, as you already know, one must be well equipped for the cold especially on New Year’s Eve. Between the months of December and January, in fact, temperatures drop between -5 ° and -8 °  and are often accompanied by cold Siberian currents. The snowfall alone is not a drama, on the contrary, it certainly contributes to making the atmosphere even more magical by whitening Wenceslas Square and its legendary Christmas tree.

Prague is easily accessible by plane, with direct flights which are also operated by low-cost airlines. Prague Ruzyně Airport which is located 10 kilometers away from the city is one of the busiest in Eastern Europe: Easyjet flies from Milan Malpensa and Rome Fiumicino; Ryanair provides connections departing from Milan Orio al Serio and Rome Ciampino. Volotea departs from Venice, Vueling from Rome Fiumicino and Wizz Air from Bari, Naples and Treviso.

If you are wondering how to get around once you arrive, you must know that Prague is well connected by an extensive subway system: if you use this means of transportation you will only have to walk some small short distances to reach your destinations. There are three lines available: the red one crosses the city from north to south; the green from east to west, as well as the yellow line.

The best hotel? In the center, or in any case close to a subway station, given the very low costs. For those who want to spend the bare minimum, there is no lack of hostels and small apartments available to share all over the city.