Known as the "Red City" or "Ocher City" of Morocco, Marrakech also welcomes us with so much greenery which is made up of sumptuous gardens, palm trees and fruit trees. This city is lively, enveloping, fragrant, and the ideal starting point for an itinerary completely dedicated to the Imperial Cities of Morocco. Let's start from here and discover together what there is to see in Marrakech.

Arriving in the Red City of Morocco: what to see in Marrakech

It is full of charm and color as soon as you arrive at the airport. The futuristic Marrakech Menara is the first of the Moroccan Imperial Cities that we will explore during this journey that will conquer us at first sight.

We decide to stay in a traditional riad which is a historic residence with an interior layout in the heart of the Old City, the medina, to fully enjoy the hidden beauties and discover together what there is to see in Marrakech before continuing with our itinerary.

Lively and overflowing with colors, smells, and tastes to try, the Marrakech medina is seductive: the houses chase each other and are swallowed by the narrow alleys where you can expect fairy-tale encounters. These streets suddenly open up to the central square where the life of this legendary city is concentrated.

Jmaaa el-Fna is the immense square full of people, stands and clubs. It is the privileged point where you can admire the fiery sunset over the city which we can rightly include on the list of "what to see in Marrakech". After sunset -  for dinner - we allow ourselves the luxury of eating at La Maison Arabe which is one of the most refined restaurants where one can taste traditional Moroccan dishes such as: the typical tajin with vegetables or meat gracefully served accompanied by live music.

What to see in Marrakech on a full immersion day stay? Lots of things including historical buildings and panoramas that we won't forget so easily.

Do not miss a visit to the Madrasa of Ben Joussef which is the oldest Koranic school in Morocco and one of the most beautiful in the world: a colorful gem set in the vibrant heart of the medina.

Founded between the 15th and 16th centuries, the madrassa perfectly preserves the original architecture whose heart is represented by the central pool for ablutions in a Moorish-Andalusian style and decorated by a series of colorful zellij which are ceramic mosaics with geometric shapes that characterize this and many other Arab-Islamic artistic places. Admission to these locations costs only a few Euros and allows you to freely visit to the main courtyard and the small rooms located on the upper floors where the students lived and studied.

At lunchtime we move towards the souq. Which one? There are 18 to choose from within the city - and a country like Morocco - that puts its most authentic soul in commerce. 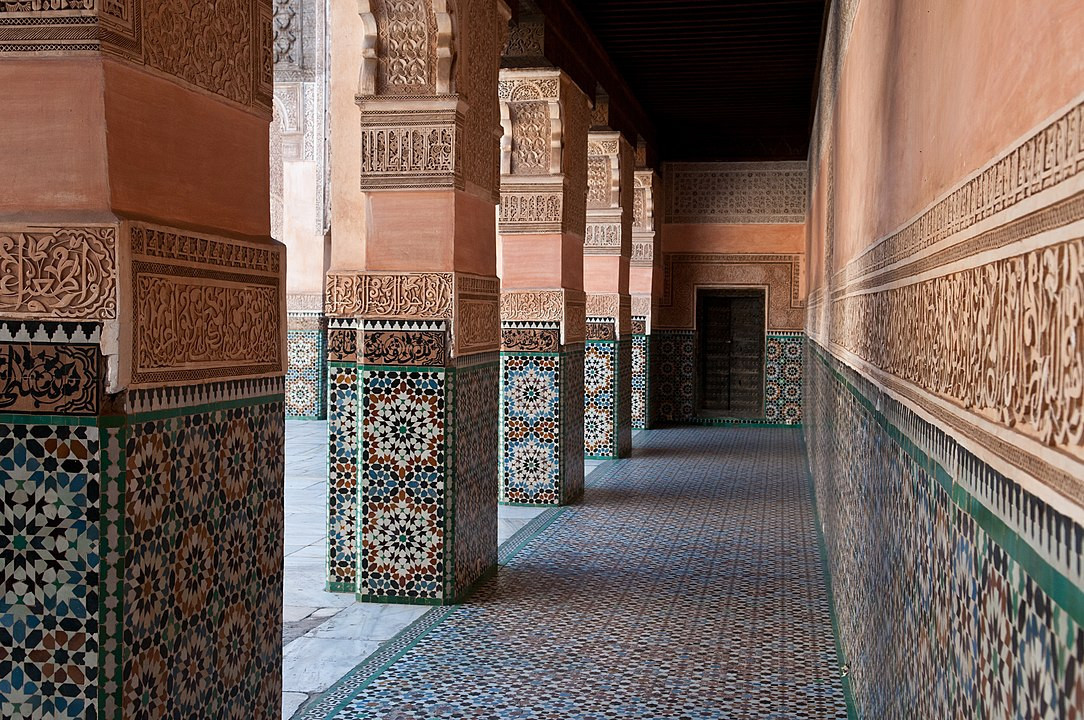 Among the stands that overflow with various merchandise, crafts and typical products, it is sufficient to let oneself be guided by the smell and the sight of the bright colors of the spices  in order to choose which of the most delicious Moroccan street food should be tasted first.

We can choose between the bessara, bean puree enriched with cumin, lemon and paprika; fried liver in butter to eat rolled up in bread; classic spicy fried sardines and  even kebabs, snails or a beautiful pastilla which is the phyllo dough filled with meat, onion and spices. 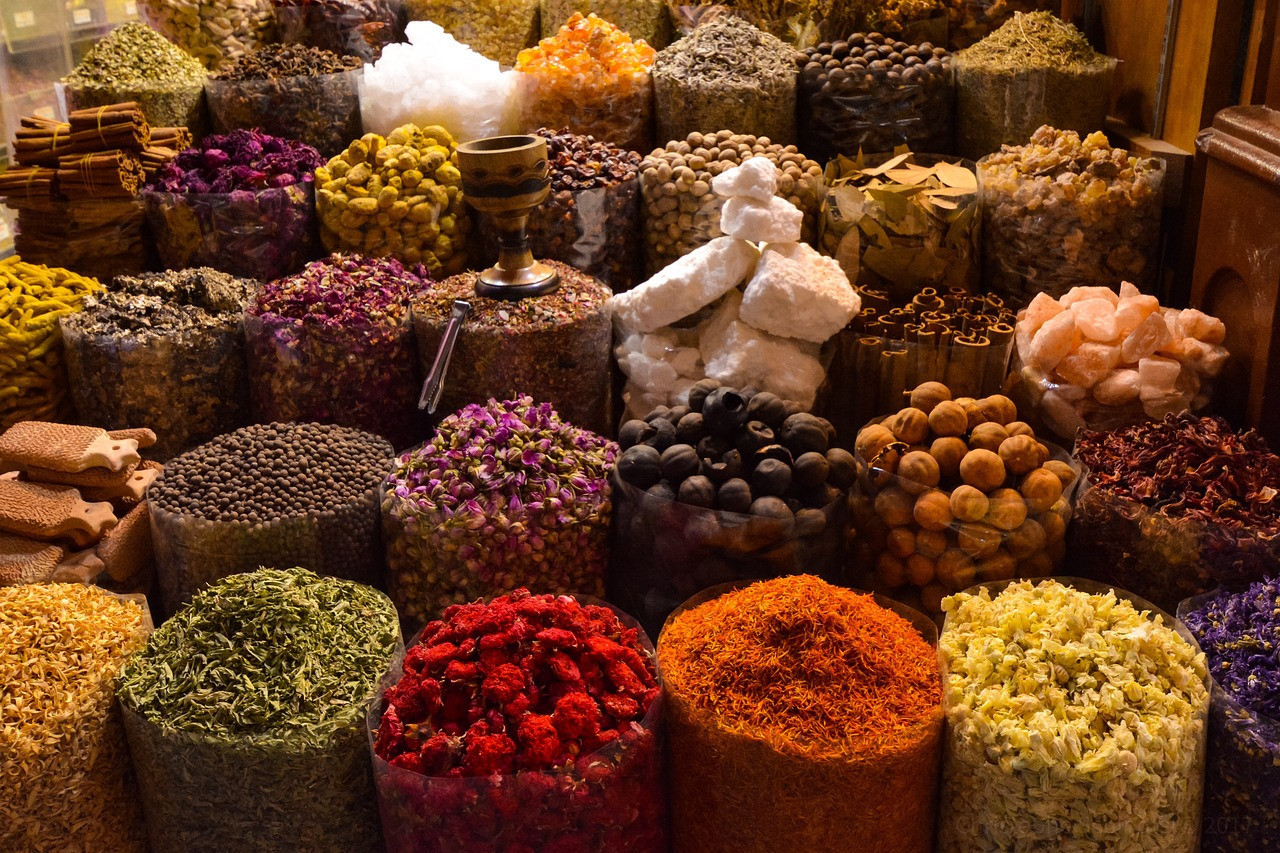 What to see in Marrakech in the afternoon? The Majorelle Gardens, the most famous and well-kept Art Nouveau villa in the city is certainly an ideal place to cool off in the afternoon.

A real enchanted garden, this corner of paradise is a triumph of blue. It is inspired by traditional Islamic gardens and contains pergolas and fountains. The Majorelle Gardens conquered the French designer Yves Saint Laurent in 1966 during his first visit to Marrakech. In 1980, he decided to buy them and settle down there to live his life as an artist. In Villa Oasis, which is a rose garden - the artist expressed in his will that this was the location where his ashes were to be scattered after his death.

Discovering the Imperial Cities of Morocco

After departing from Marrakech we can continue our tour on the route of the other Imperial Cities of Morocco.

There are four Imperial Cities: in addition to Marrakech from south to north-east we have: Rabat, Meknès and Fès.

They owe their names to the work of the various dynasties of rulers who, at different times, chose these locations as their residence, therefore bringing them to their apotheosis during their reigns through important architectural interventions. 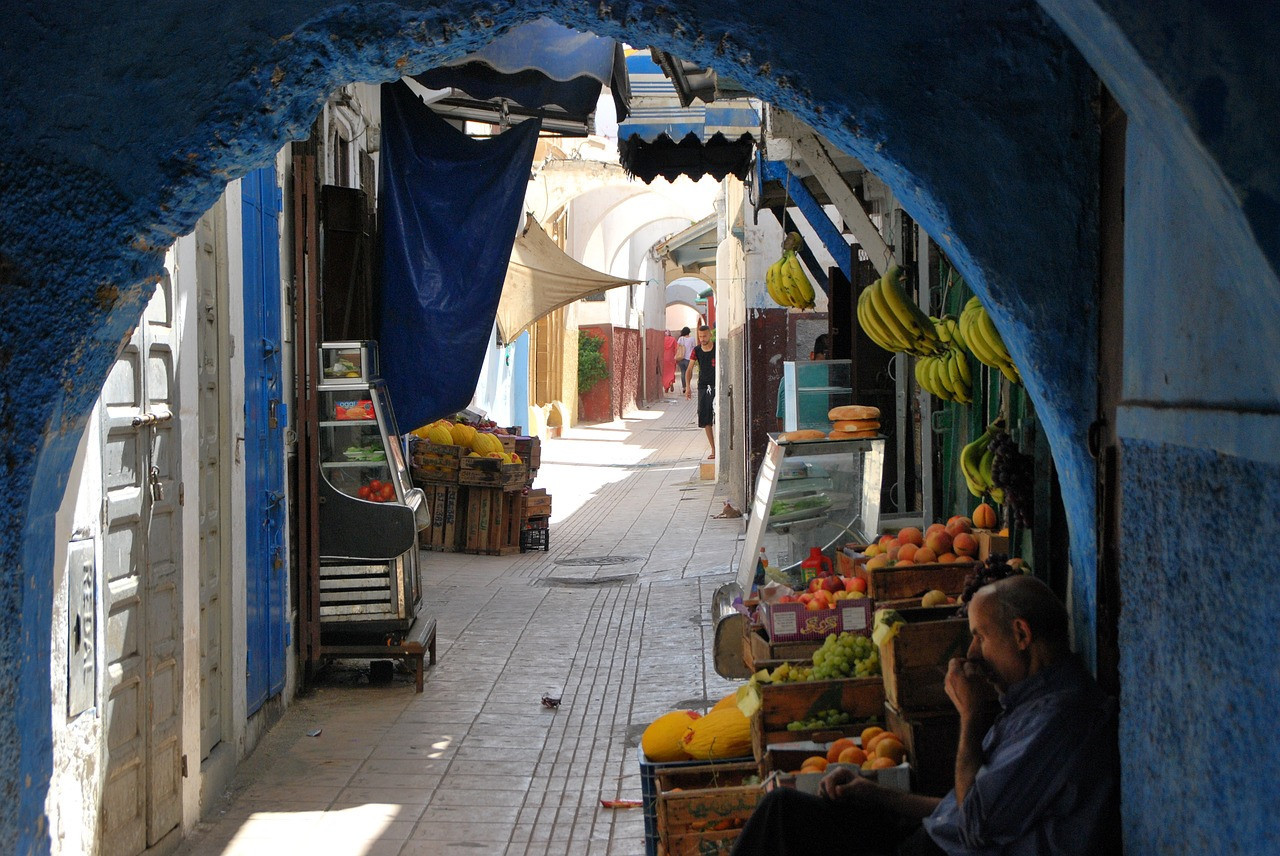 What to see in Rabat

The journey to the north takes us to Rabat which is the capital of Morocco today and is located on the Atlantic shore. It was founded by the Almohad caliph Abū Yūsuf Yaʿqū al-Mansur.

It was the sultan Muhammad ibn Abd Allah, however, to designate Rabat Imperial City, in the XVIII century. He left behind leaving important signs of his passage, such as the Dar al-Makhzan Palace.

The city of Rabat was declared a UNESCO World Heritage Site in 2012 and is now a protected asset, not only for its historical center but also for the modern part of the city, which is perfectly integrated with the precious pre-existing cultural heritage.

The historic center of Rabat consists of the Medina which is the characteristic walled neighborhood that stands opposite the Old Town of Salè that was built on the opposite bank of the Bou Regreg river.

At the mouth of the river you will find one of the main tourist destinations of Rabat, the Kasba of the Oudaïa. It was built on a rocky promontory in the 12th century by the Almoravids which was a Berber dynasty from the Sahara. Inside the kasba, along the rue Jemaa, we can visit the Jāmi al-Atīq mosque and the Andalusian Gardens.

You must surely not miss the Hassan Tower beyond the medina. It is one of the most photographed landmark monuments in the city. 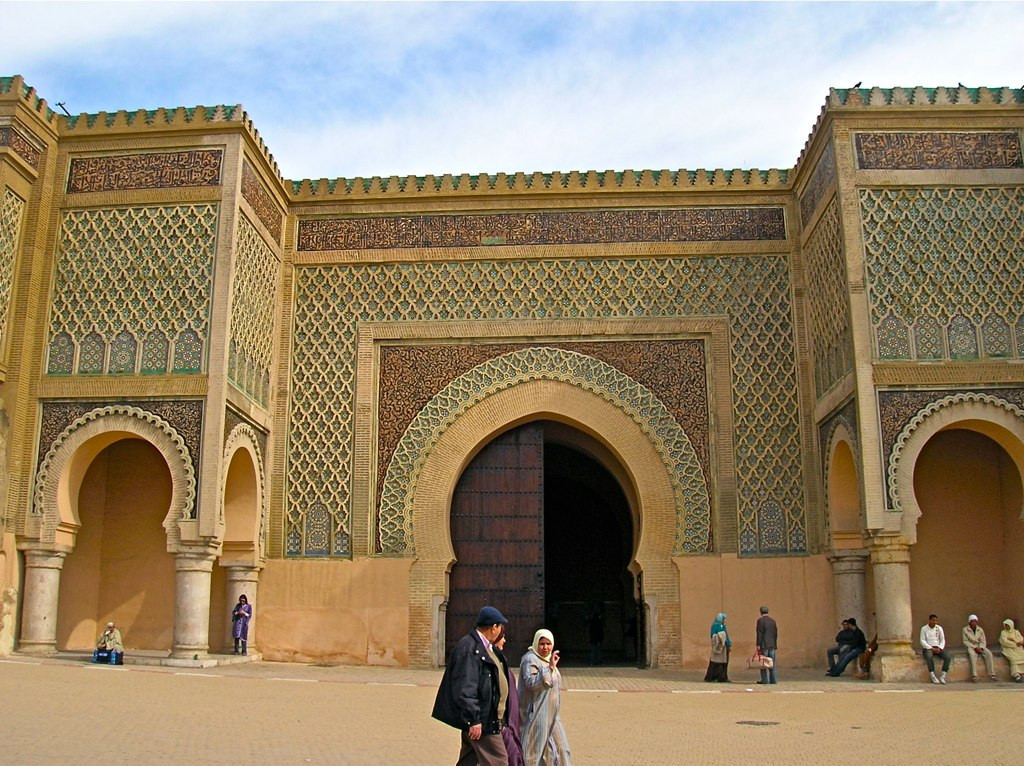 What to see in Meknes

The green city of Meknes gets its name from an ancient Berber tribe named Miknasa and is the most modern of the four Imperial Cities of Morocco.

The medina of Meknes has been included on the list of UNESCO World Heritage Sites: it dates back to the 11th century.  The ancient part of the city was built as a fortified citadel and over the centuries it was surrounded by high protective walls taking on its current appearance.

The pulsating heart of the medina and Place el-Hedim, the large central square full of typical sellers and bars - is not far from the imposing Moulay Ismail Mausoleum which visible only from the outside for non-Muslims, but which certainly does not go unnoticed.

A must visit instead is the Medersa Bou Inania which is the Koranic school of Meknes where the youth of the city has been educated over the centuries.

What to see in Fès

Our journey started from "what to see in Marrakech" and continued to the other three Imperial Cities of Morocco and ends with the jewel of all jewels: Fès, the oldest medina in all of North Africa and one of the oldest in the world which has been inhabited for centuries without interruption.

It is considered the religious, cultural and artisan center of Morocco. The city of Fès is a treasure to be experienced and photographed. Fes el Bali - the Medina - has been a UNESCO World Heritage Site since 1981.

Where does one begin when visiting Fez? Certainly from Bab Boujloud, or the "Blue Door": it is here that many restaurants and cafes are located and where you can also enjoy a delicious mint tea.

In addition to madrasas, mosques and imperial palaces, one of the most characteristic and fascinating places in Fès is undoubtedly the tanneries district. 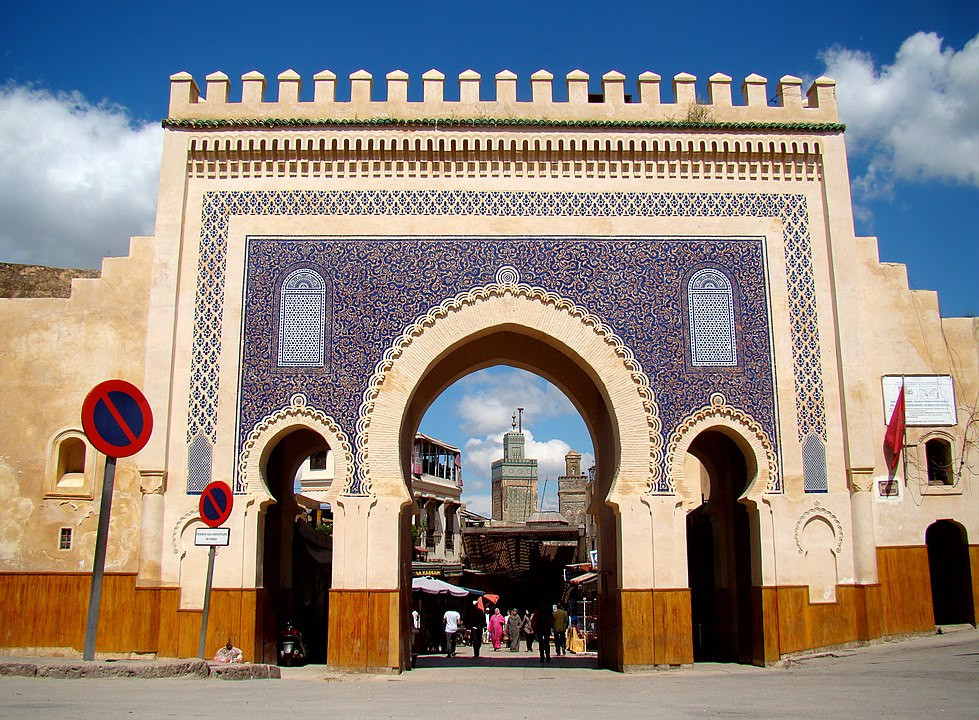 The oldest tanneries in the world are located here. Dozens of people still work in this place today  exactly as they did in the Middle Ages immersed in leather and handmade colors. This is where you can buy the most beautiful handmade leather and leather products that come from Morocco.

The smell is quite annoying in the neighborhood, but it's definitely worth it. It is almost a guarantee that a shopkeeper will give you some fresh mint leaves to keep under your nose during your walk through this area. This is the proverbial spirit of hospitality that distinguishes Morocco and its lively inhabitants.