Chiavenna is a town with a strong tourist vocation that is immersed in a valley and is known above all for the Sagra dei Crotti which attracts thousands of visitors every year.

The “sorèl" is a mysterious stream of cold air that comes from the depths of the mountains, and that insinuates itself uninterruptedly through the narrow spaces that exist between the rocks.  This contributes to the creation of an ideal environment for the maturation of wine and the seasoning of sausages and cheeses.

This is somewhat what happens in Chiavenna and, specifically, within the Crotti: natural ravines are born from archaic landslides which are detached from the slopes of the valleys that characterize the entire area. These settlements nurtured the cavities with unique peculiarities  in the remote past. These recesses were first "exploited" for the realization of environments in which preserving food was a top priority and, subsequently, were needed to create an environment in order to welcome the tourists.

Today the Crotti are more than just wineries: they are a consolidated reality; the engine of an economy that embraces a vast and flourishing territory; and a small universe that includes the mountainous regions of the Alps, the Italian part of Switzerland and, in particular, Lake Como.

The Sagra of the Crotti

We now find ourselves to the north of Lario in Valchiavenna which is an alpine region that is crossed by the rivers Liro and Mera. It is a land made of open spaces and steep cliffs and it is located in the province of Sondrio.

It is here that Chiavenna emerges. It is a town with just over seven thousand inhabitants and in the past it was an important strategic center located at the heart of ancient Rezia. It is a  place where culinary art and typical products - such as bresaola, cheeses, wines, pizzoccheri (gnocchi made with wheat flour and dry bread soaked in milk), polenta and cured meats - are  important tourist desires.
What makes this location attractive is the combination of both the historical and cultural heritage transforming Chiavenna into a tourist attraction of excellence.

Not surprisingly, around the "sorèl", the locals built small buildings used as inns, restaurants, or place where you can simply enjoy a refreshment. The businesses are open all year round  or only during the traditional Sagra dei Crotti which was an event born in 1956 and is generally held in Chiavenna in the second week of September. This event attracts thousands of tourists. Visitors can taste the local specialties and enjoy the fresh breeze of the "sorèl", which maintains a constant temperature of about 8 degrees.

Food and wine tours in the Crotti

During the festival it is possible to taste the traditional dishes: meat and vegetables with pioda, Prosto biscuits and the delicious “torta fioretto”. Or one can choose to take part in one of the food and wine tours organized by the Committee. The details are available on the website www.sagradeicrotti.it. 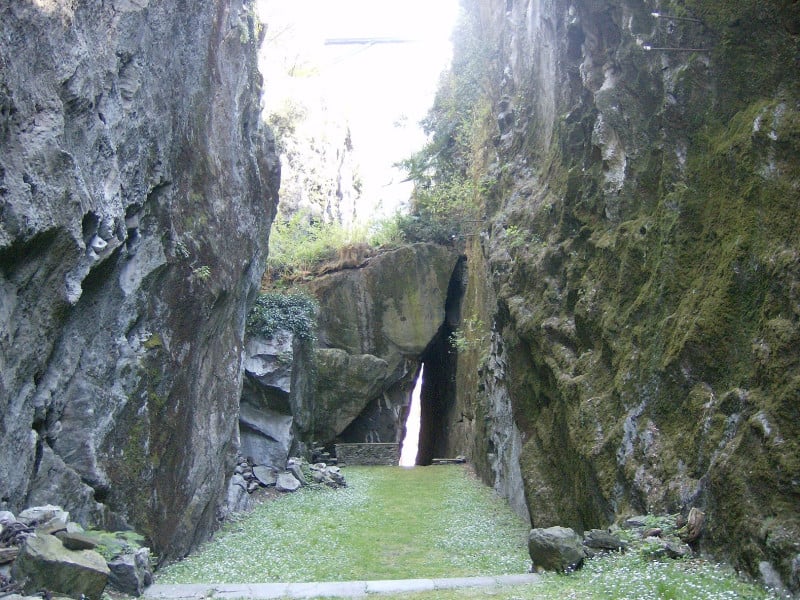 The term "Crotti" (most likely deriving from the word "cave") over the years become a typical surname of the area, especially in Bergamo. According to the scholars, it was born from the noble Arimanni Longobardi who, during the Middle Ages, first settled in the countryside surrounding the ancient city, and later near the caves. The warriors who travelled on horseback took the name Crotti in the Celtic-Bergamo dialect.

Today, the surname "Crotta" or "Crotti" is widely found in Lombardy and there is also a small presence in Emilia Romagna. It mainly concentrated in Bergamo, though.

Taking a trip to Chiavenna is not only synonymous with tasting typical products in Crotti, but it is also a trip full of history and knowledge. This is evident with the various monuments and places of cultural interest that are located in the fantastic place. Among these we can find the majestic Collegiate Church of San Lorenzo where inside the Treasure Museum is located.

The museum contains a vast collection of sacred furnishings and vestments and a very rare musical code. The most important piece is certainly the Peace of Chiavenna which is one of the greatest masterpieces of medieval jewelery.

The Peace is a cover of Gospels that dates back to the 11th century and is composed of 25 gold plates. It is chiseled on a walnut table and adorned with gems, pearls and enamels. This work owes its name to the liturgical use during Mass: it was brought to the public for the "kiss of the faithful" at the time of the peace exchange.

On the Peace we can find the symbols of four evangelists and the following writing in Latin: "They live in Christ and those who have made or make such work obtain the Kingdom through Him.”

Reaching Chiavenna is not difficult, as it is crossed by the SS36 route - which is an important linking road, as well as by the SS37. By train, Chiavenna is the end of the Colico-Chiavenna line.