Doha is the capital and most populous city of Qatar and is the first inevitable stop for all tourists arriving to this small Arab state.

Surely, it is the location where tall of he major attractions are concentrated. However, if you move away from the modern skyscrapers of the Corniche waterfront, and from all of the pomp and luxury of the artificial Pearl-Qatar island whose that overlooks the Persian Gulf – it is here that the visitor can find the most authentic face of this place.

Taking on the dunes aboard a 4x4

Perhaps the most suggestive experience begins for the tourist about 60 kilometers from Doha to the south-east, where the lights of the modern city are lost: the discovery of the Khor Al-Adaid nature reserve.  It is also known as the "Inland Sea" because it is one of the few places in the world where the waters of the sea creep into the heart of the desert (even for 10 kilometers)- This peaceful body of water cannot be reached by a road, but only by passing through high sand dunes. For this reason, local tour operators offer packages that involve trips aboard powerful off-road vehicles. In order to move around easily, many drivers deflate the tires of the 4x4s during the trip, only to re-inflate them before reaching the road on the return to Doha. Once you reach this place, you can then also choose to leave the vehicles and proceed by riding a camel for the classic yet exciting journey which is proposed here, as well as in every other corner of the Middle East.

On the opposite side of the Qatar peninsula - just west of Doha -  another striking excursion is the one that leads to the Zekreet desert found in the Brouq nature reserve where four gigantic rusted metal sheets pierce the arid and hard ground. They make up the East-West/West-East which is  the last and greatest public work of Richard Serra.

He is a well-known American artist who is famous for his creations with metal sheets. The imposing steel elements are 15 meters high and are distributed for over a kilometer. They are visible -  like a mirage - from far away distances and from all directions. The work was commissioned to the artist in 2014 and the four metal mausoleums were first produced and assembled in Germany before being shipped and transported to the Middle East. 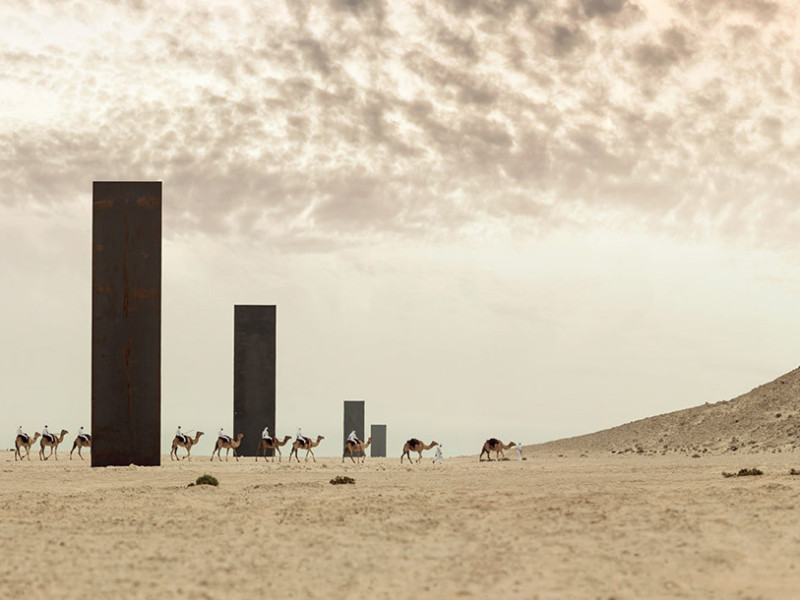 East-West/West-East: Richard Serra's is a Californian artist whose installation stands in the middle of nowhere. The four 15-meter-high rusty iron pillars, along a one-kilometer stretch, sometimes recall post apocalyptic scenarios of the famous Mad Max series.

Another creation by the same artist in Qatar is "7". This time the scenery is very different and perhaps less suggestive, but with an equally fascinating effect. On the Doha waterfront which is a stone's throw from the Museum of Islamic Art (MIA) that overlooks the Gulf and the skyline with its bright lights, stands an obelisk composed of 7 steel plates. Hence the name of the work -  "7": a number that is often recurrent in the Islamic tradition that has a special spiritual meaning in Qatar and in Middle Eastern culture in general. The slabs which are about 25 meters high, leave openings that allow visitors to walk through the sculpture and look at the sky from the inside. It is very impressive and definitely worth a visit. This can be done, perhaps,  in conjunction with the MIA which it is a few hundred meters away and reachable on foot through a park that overlooks the Gulf.